All images are photographed late in the evening for posting the same night we paint them.  We strive to reproduce the color of the paintings here as close to our originals as we can, but some variation is probable.  The paintings are labeled with our initials preceding the date label and title.  The date label is Month/Day/Order Painted.

All of these paintings can be purchased on our website.  This link will take you to the page where they're posted... Salt Marsh Studios.
Dottie's Day

We had a little rain to start the day with, which meant good clouds in the morning.  Actually, we had crazy good clouds all day.  It was "Moms Day Out", so we packed her up, delivered her and headed out to the marsh to paint.  This part of the marsh is right off of the highway, but it's amazing how the sound of cars and trucks disappear when you are absorbed in your painting.  The whole world is whittled down to just what is in front of you in the moment. It is meditation, although a very active meditation, with thousands of observations and decisions rolling through your mind as you absorb what you see.  It is exhausting and exhilarating, emotional and calming, alert and focused and peaceful, all at the same time.  Addicting. 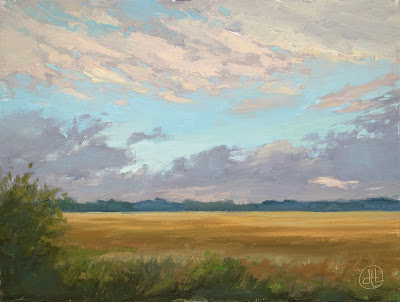 DTL - 1/27/1 - Monday Colors
The sun was in and out and the sky was so dramatic looking west.  I love the wide open spaces when the skies are exciting. Deep dark purples, corals, yellows, greens and blues... and that was only in the sky!  The marsh was lit up a beautiful golden by the low hanging sun.  This was such a joyful little painting to paint.  After the more muted hues of the last few days, the chance to put some real color on the canvas was a nice change. 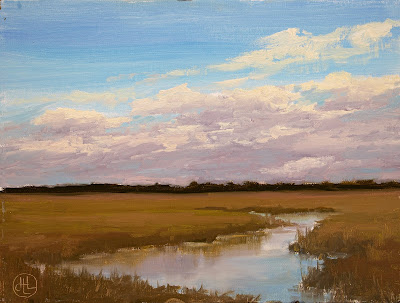 DTL - 1/27/2 - Serendipity
I had a chance to paint one more before we had to pick up mom.  I turned about 45 degrees to my right and decided to paint the water while it was still high in the creek.  The strong darks of the morning clouds had given way to soft lavenders, pinks and yellows but the sky was still that bright blue that you always see here in the winter.  It's as if God knows you need a little more bright blue in the sky to get you through the winter months.  Although the sky was clear to the north, the sun was hidden behind clouds for most of the second painting.  The marsh was darker and a little flatter in color which really gave the water and the sky the attention they deserved.

DTL - 1/27/3,4
In the afternoon we headed back to a stretch of marsh overlooking the shipping channel.  Below you can see a ship coming through while I was painting.  It always looks like they are sitting right on the marsh.  Their massive size never fails to amaze me, even after a whole life of seeing them.   I love the long low horizontals of all of the islands you can see from this perspective.  It called for a more horizontal canvas than 9x12 so I put two together to try and get that feel.  The sun was out when we started but before I could get my block in done, it had gone behind the ever increasing clouds.   In cloudy conditions, the colors of all of the bands of different marsh grasses really stand out... greens, reds, oranges, golds, even this really lovely one that is almost a magenta color.  That combined with the stretches of sand dunes was so interesting to paint. 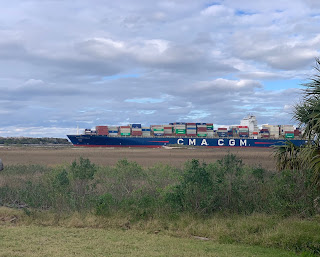 As I committed to last week, this was another day out with the acrylics.  We had 80% humidity yesterday, even though it was a beauty  of a day after the early morning rains stopped.  I'm learning a lot about these acrylics.  When it's hot, dry and windy, they're gonna set up FAST!  When the temperature and dew point are nearly identical (means moisture of some sort is in the air), they almost NEVER dry!  Those are the extremes, somewhere in between lies the place where these paints, the Golden Open Acrylics, satisfy all of my painter and painterly needs.  I painted the diptych in the morning when it was the most humid and almost became frustrated when the paint wouldn't set up enough for me to overpaint areas and build up contrast in softer passages, as I had planned to do.  I had to sit down and take a break to let the paint begin to firm up before any of it could be painted over.  Took me longer than it should have to finally put it into the dry box, by then it was time to move on.  Because of the morning, I decided to take out the Utrecht Heavy Body acrylics, fast drying type.  By the time we started painting the atmosphere had dried up, the winds had picked up, and the Utrechts about did me in.  They dried so fast I couldn't even blink before they did.  We were at Ft Pulaski, a few hundred yards from my truck, where the delicious Golden Opens were laying nestled in the 'big tub of mess'... art supplies... just waiting for another chance.  I sauntered over in that direction, deciding to take a short cut through a little boggy area.  That went well until I was walking on top of floating grass hummocks and one foot missed!  Walked back with the Golden's tucked warmly under my arm and repainted the scene I had started, a much more gratifying experience than I had with the faster drying Utrechts. They're fine paints, just not for me outside.  I need some time, they don't give you more than a few seconds in those conditions. I'll be sticking with the Golden's outside... moral of the story.

MH - 1/27/1&2 - Marsh Shadows
We love to paint this ox-bow on this little creek on McQueen's Island.  At high tide it's full of water, at low tide it's usually flanked by at least a couple of locals crabbing or fishing.  I centered the water passage in order to create the depth to pull the eye in, and then let the spread of the marsh take over and show the distance of the place.  I thought about placing the water off to one side or the other, but I liked this idea better. 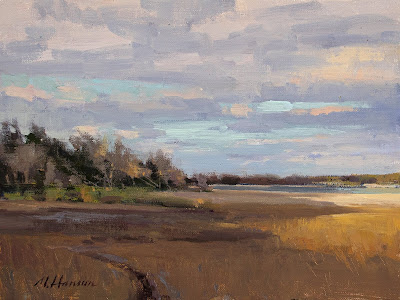 MH - 1/27/3 - Moving Shadows
My titles are getting less than very original.  However, in my defense, all day long the sky was tossing shadows around the horizontal of the land masses we visited.  While painting this one, we went from a beautiful, colorful, broken sky that was creating lot's of warmth on the landmass, to a completely socked in sky, the landmass nothing but dull grays. Then the sun broke through and gave me an idea.  I created the entire foreground shadow by over painting all that I had already painted into a cooler grayed down version of the local color (thank you acrylics), and then placed the sun breaking through, that was gone by now, to the right of the composition, highlighting the marsh, the beach, distant shore and could above.  I also had to create the foreground because where we were painting was on a cut trail, with a grassy edge.  In the painting I eliminated that, brought all of the foreground to the bottom of the image and created the little cut of a stream or mud path, or whatever, as a path into the middle ground.  Thanks for looking in.

Dottie and Marc, have thoroughly enjoyed reading this and admire your dedication and work ethic to get out there plus some great work by both of you, I am inspired to try it for a month myself! Thanks for the Inspiration.